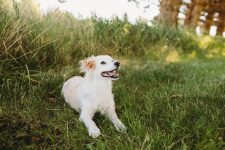 Just like people, dogs communicate using body language. Your dog is communicating with his entire body, not just his tail or his voice. If you want to know how he is feeling, you’ll need to learn to read your particular dog’s body language. To get a sense of what your dog is trying to tell you, spend as much time as you can observing your dog and his body posture.

Because each dog is an individual and will express fear, aggression, stress or joy slightly differently, there are no hard and fast rules for interpreting dog body language. Tail wagging, for instance, can indicate several emotions. The important thing is to look at the entire body of the dog. With that said, here are some examples of dog body language and an explanation of what they might mean.

The rear end of the dog is up, while the front end is down. The play bow generally means: “I want to play.”

Contrary to popular belief, tail wagging (and the position of the tail) can mean many things:

A dog freezes if she is scared or guarding something, such as food or a toy, or feels cornered. She may bite, so please slow down and pay attention to what she’s trying to convey.

A dog rolling over onto his back can have multiple meanings. Rolling over generally means “I am not a threat.” If the tail is gently wagging and the mouth is slightly open, the dog is probably comfortable and asking for a belly rub. If the tail is tucked and the lips are stiff, however, the dog may be scared. Some dogs will solicit attention by rolling over, but then become fearful or defensive, feeling that this position is not safe. The dog may even panic and start snapping. Again, observe the whole dog, looking for comfortable, loose body language. To be safe, don’t hover over a dog or crowd him when he’s upside down. Dogs do best when they have the space and ability to change from one position to another quickly and comfortably.

When a dog’s ears are forward, he is alert, interested in something.

Tail between the legs

If the dog’s tail is tucked between her legs and her ears are back against her head, she is afraid and uncomfortable about something.

When a dog is stressed, he often shows displacement behavior, any of a variety of activities that seem inappropriate in the situation. These behaviors occur most often during times of emotional conflict. For example, a dog may start grooming himself when he’s afraid and is faced with the decision to fight or run away. Self-grooming, an odd response to a “flight or fight” situation, is displacement behavior that the dog uses in an attempt to calm himself.

Be aware that your dog is likely feeling stress along with fear when he/she:

Many people chastise dogs for growling, but that just discourages the dog from attempting to communicate that he’s stressed or fearful. If your dog is growling or is indicating in some other way that he’s stressed, stop whatever you are doing and try to determine what the dog is reacting to. You want to help the dog become more comfortable in the situation or manage the behavior in the future so that a bite to a person or animal doesn’t happen. Often, if we slow down whatever situation caused the fear and start exposing the dog in small amounts at a distance, we can help him to completely overcome his fear. We can also help dogs become more comfortable in general, in order to keep them, and us, safe.

If you want to learn more about your dog’s body language, Best Friends animal behavior consultant Sherry Woodard has this to say: “Turid Rugaas has a lot of information on dog body language in her book On Talking Terms with Dogs: Calming Signals. And in her DVD, Calming Signals: What Your Dog Tells You, viewers can see her pointing out various signals dog use to communicate with each other. Other valuable books are Canine Body Language: A Photographic Guide to Interpreting the Native Language of the Domestic Dog by Brenda Aloff, Canine Behavior: A Photo Illustrated Handbook by Barbara Handelman, and Dog Language: An Encyclopedia of Canine Behavior by Roger Abrantes.